I bet you thought this blog was dead. Well, as it turns out, it was just taking a really long nap. Like the kind of nap that new parents would dream of (if they slept enough to dream). But it's awake now, so welcome (back)!

Why, pray tell, is this blog back up and running after so long? Well, in 2017 I left my career in academic technology, and after about a year of soul-searching (aka lots of crying and hyperventilating and working in a job I hated) I decided to take a risk and make a real go of this whole writing thing. And it's been hard, but also fucking fantastic.

Over the course of the last year, I wrote a novel: My Kind of B*tches.

It's not published yet (except for when my husband accidentally "published" it on Amazon, oops. It's not really published, we were just getting copies for my beta-readers!) But I just felt the overwhelming need to share. I can't help it. I'm just so fucking excited! The sequel is in the works too, but writing can be a lonely endeavor, and, as Michelle would say, I'm in the mood for a little attention!

I also decided to start blogging again because of how inspired I am by Jenny Lawson, aka The Bloggess. I fucking love her and it is a dream of mine to have her read my book. And I was hoping that if I reconnect with readers and writers here I might gain some valuable insights on the writing and publishing world. (So far I know I can write a book, but query letters have got me like ... whut?)

Here is a little synopsis: 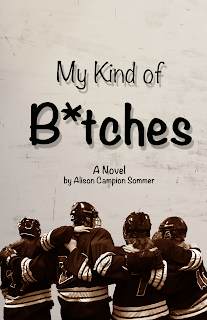 My Kind of B*tches is about four badass ladies. They’re sick of the dramatic bullshit on their hockey team, so they work together to build something new. Well, Fitz does most of the work, honestly. But the hockey team isn’t really the point, it’s all about relationships and drama, and about helping your bitches get through the tough shit in life. Let’s start with Fitz. She’s beautiful and strong, she’s intense and passionate, and she’s married to a total douchebag. She doesn’t want to admit what an ass her husband is, but the more her marriage falls apart, the harder it is to deny. Then there’s Michelle. She’s also smart and strong, and she fucking knows it. She has a toddler and is thinking about having another baby, but nothing in the motherhood department seems to be going right. Toddlers are impossible, and pregnancy is the worst. What even made her want to be a mom anyway? Dawn, now she’s got the mom thing down. She’d better, she has four kids. Her wife is super awesome but struggles with depression, which can place quite a burden on Dawn. But Dawn can totally handle a depressed wife, four kids, a fulltime job, and a dramatic-as-shit hockey team, right? Last we come to Tessa. She has pretty much no life outside of hockey and work. She’s an engineer and a damn good one. But all the little men at her job just can’t seem to get over the fact that somebody like Tessa might just be smarter than the lot of them combined. These four women, unlikely friends as they might be, have a common love: hockey. And the bonds they form as teammates help them not just take down bitches on the ice, but take on the drama of life itself.

So here I am, back to blogging. I promise it won't be all about the book. See you around!
x
Published Wednesday, April 17, 2019
Email ThisBlogThis!Share to TwitterShare to FacebookShare to Pinterest