Do you know what drives me crazy? I mean really, really crazy? Putting kids into boxes based on their gender and attribute their activities and interests to their sex rather than their social conditioning. I swear, if I see another "you know you have a girl/boy if" post I'm going to lose my mind. I'm sick of being bombarded with the idea that if my daughters like dolls it's because they are girls but if they like trucks it's because... I'm progressive? I wish we, as a society, could stop raising boys and girls and just raise kids. 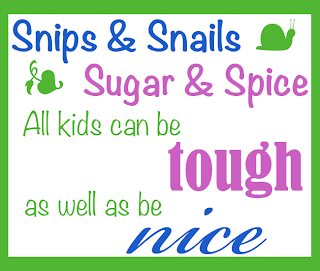 In raising two girls, I see how often they are put into categories and defined by their sex. I also how the way their peers are raised impacts my kids. My oldest has come home from school and told me that "girls like princesses and boys like super heros" like it was some fact that could not change (she also tells me that boys dress "cool" and girls dress "pretty"). I've fought hard against these notions, but it's hard because I can't dispute her findings: in her class most of the girls prefer princesses and the boys super heros (since she likes super heros and princesses she has agreed that girls can like both) and I would bet hard cash that part of the reason is that many of their parents reinforce these interests by buying movies and toys only of the "right" type for their child's gender.

Its not just the shows we watch or toys we buy, but the activities we sign our kids up for. My girls just started T-ball last week. I'm not that into baseball/softball personally, but my brother and sister both did t-ball as kids, it seemed like a good basic sport for the summer time. My 3.5 year old's T-ball team has 2 girls and 5 boys. And in looking around at the other teams (there were 6 teams playing that night) they all were overwhelmingly filled with boys. I'm not even sure all the teams had girls. WTF? Where are the girls? Why didn't parents of girls sign them up for T-ball? Don't tell me it's a lack of interest on the girls' part, these are preschoolers, they don't know yet if they like T-ball! Most of the kids who were there didn't even know to run to first base after hitting the ball! (several chased after their own hits, it was so darn cute). Clearly they weren't clamoring to play a sport they obviously know nothing about.

In the reverse, there are activities that people just don't offer to boys like they do to girls. For example, why don't people play house with their boys? When my oldest was 2 she had a baby doll themed birthday party where kids were supposed to bring their own dolls and we had stations and activities, like feeding the babies or taking them to the doctor. But none of the boys who came had their own dolls! I was shocked because I knew they liked playing with dolls at school, there was overwhelming photographic evidence on the school website. So why won't their parents buy them dolls? Many of these little boys will grow up to be fathers, playing house as a kid might, you know, instill some good fatherly feelings in them. Would that be so bad?

I have a crazy hypothesis  I think that raising kids as equals across genders will help raise more equal adults (shocking, I know, don't fall off your chair). For our daughters, let's put the sugar and spice on the back shelf sometimes and hand our girls some snips and snails (whatever the hell a snip is). The opposite can be said for boys, heaven knows many boys could stand to be raised with a bit more "nice" in them.
Published Thursday, May 30, 2013
Email ThisBlogThis!Share to TwitterShare to FacebookShare to Pinterest
Newer Post Older Post Home