There should have been more Darth Vaders

(As a preamble to this geeky post, I want to mention that I will be staying away from Extended Universe material (aka Star Wars novels, comics, and video games) as much as posible for this post. I'd rather go at this from a more accessible  pure-movie standpoint. However I do not object to people bringing up the EU in responses.)

It's Star Wars time again, folks (it is my favorite movie of all time, after all). Last week when I posted about EVIL I mentioned that I was tempted to post about it within the Star Wars universe, in particular about why Jedi Order of the pre-imperial era was so ripe for the creation of Darth Vader, and some folks asked me to actually write that post, so here it is. 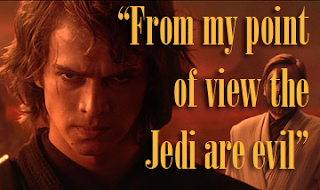 In the days of the old Republic, the Jedi Order had significant power, at least in the core worlds. They had a huge temple with vast grounds and resources right in the heart of the capitol planet, Courasant. At that time there were thousands of Jedi, all ultimately controlled through one central, and fairly small counsel. But forget the counsel. Thousands of Jedi. How did they get so many people to agree to live the life of the selfless monk? For starters, they captured them as babies.

Is captured a strong word? Heck yeah. But it's what they did. They had the power and influence, so that when a child in the core worlds was "identified" they would take them into the Jedi fold. And the Jedi were forbidden from having babies themselves, so that means all new recruits were taken from non-Jedi households (woah). Then the children were raised by their Jedi captors to learn nothing but what the Jedi taught. Think about that, what does that sound like? If you said cult, you're thinkin' like me. When Anakin Skywalker was first discovered on Tattooine (outside the core worlds) he was dismissed as too old by some on the counsel and he was only 9! This seems to indicate that the counsel knew that some level of brainwashing training had to start early to really take hold and mold the proper Jedi. Creepy, right? 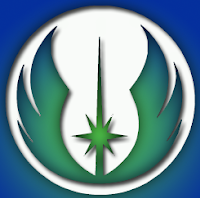 So the Jedi get their little future padawans as babies, brainwash them teach them, train them, and draft them right into their own ranks as teachers and trainers (a classic move, making the trainees the trainers to drive their loyalty deeper, very popular in militaries around the world). They also impose very harsh/strict rules on the Jedi and Jedi-to-be. They are taught to control their emotions, quiet their desires, and "let go of anything [they] fear to lose." Basic attachment is forbidden. This means no real personal property and no romantic relationships. So sex and money are totally off-limits (I'm guessing they aren't a fan of drugs and rock-n-roll either). Jedi have to do what their masters tell them, they have little to no autonomy. Great. Sounds like a wonderful life.

Now you might be thinking that I've forgotten that Jedi do leave the order. Duku left. Obi-wan warned Anakin that he could be expelled. So one must assume there are some number of Jedi cast-offs wandering around the galaxy. But why so few? Well, it would be a pretty hard choice to make, after all that time the Jedi had invested into filling your head with doctrine and cutting you off from the outside.

Imagine, you're a young Jedi Knight. You've never known your family, maybe you've never really felt loved. You've got all those hormones of a young adult human (let's go with human for this example, I don't know much about the hormones of a Mon Cal or Bothan or anything else really), you fall hard for some hottie, maybe even another Jedi (I've heard stories from boarding schools, there's got to be some hanky-panky goin' down in the Jedi dorms), the two of you are in love (and/or lust). Then you and your master get sent to the other end of the galaxy on some wild bantha chase, and you're not sure when you'll come back. It's a classic conundrum  You might think to quit the order. But since you've spent your whole life with the Jedi Order you don't have any other support structure. No way to find a regular job. People don't trust you if you say you're a ex-Jedi (I bet they don't really even trust the regular Jedi, baby-snatching, mind-controlling freaks with swords, I mean really), but you have no other education or connections. So maybe you don't quit. You just stay in the order, getting more and more upset at how you're stuck between a rock and a hard place. One day you're going to snap and somebody is going to end up eating lightsaber.

Why isn't that a more common story? Or maybe it is and the Jedi just don't want us to know. Maybe it doesn't matter because all the angry/depressed/sad/disillusioned Jedi don't have half the raw Force ability as Anakin Skywalker. So was the Jedi Order really "good"? Or were they just getting away with being a big intergalactic bully until they finally ran into somebody stronger than them? Does anybody else feel a little bit bad for Anakin, like you can see why from his perspective the Jedi are evil? Yeah, I thought so.
Published Friday, May 31, 2013
Email ThisBlogThis!Share to TwitterShare to FacebookShare to Pinterest