Through the Force, things you will see, other places, the future, the past, old friends long gone...

I didn't make a May the Fourth post on May 4th because I was way too busy celebrating the wonderful fabulousness that is Star Wars, and now that I've gotten back into some Star Wars books (I'm on The Joiner King right now) I want to go back and talk about Star Wars and May the Fourth. For this geeky holiday we had a handful of friends over, bought a bunch of frozen pizzas, revved up the kegorator, and called it a party. We took out even more Star Wars toys for the kids, like our little voice activated Artoo (he's more like a pet than a toy to us). The kids played and the adults watched Star Wars and talked and generally geeked out. I have some amazingly geeky friends, y'all. Arguing about TIE fighters and the Hoth battle made my day (even tough it's totally stupid that TIE fighters can handle entry into the atmosphere without thicker hulls or shields).

I decided we should watch Star Wars in the Machette order, where you watch A New Hope and The Empire Strikes Back, so you get the "I am you father" reveal, then jump into a flashback and watch Attack of the Clones and Revenge of the Sith (you skip Phantom Menace, which is ok, I like parts of it but as a whole it was pretty worthless). Then you finish the whole thing off with Return of the Jedi. It was my first time watching it this way and it was awesome. It really brought out the heart and soul of the series, which to me is all about the fall of the Jedi, the rise of Vader, and then his eventual redemption through his son. (corny, I know, but I love the sappy Jedi stuff) All in all, between my fabulous friends and the wonder of Star Wars, May the Fourth was pretty magical. 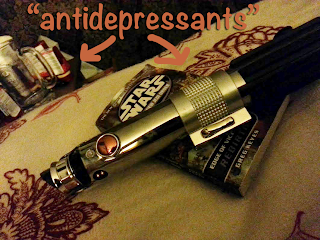 Unfortunately, since then I have found myself in a cycle of depression. Fortunately, Star Wars is something that really helps me muddle through these times. I don't really know how to explain it without sounding like a real weirdo, but when I'm stuck in the emotional suck that is depression, there's some relief to be found in surrounding myself with as much of the comfort of Star Wars as possible. I don't have to force a smile for my lightsaber. Or  make conversation with a puzzle. And when I'm reading a book or watching a movie I don't even have to think. Star Wars is like a big fluffy security blanket. How do other people cope with depression without it? Star Wars FTW.

May the Force be with you.


Published Friday, May 10, 2013
Email ThisBlogThis!Share to TwitterShare to FacebookShare to Pinterest