6 Reasons why you should go to the Renaissance Festival (and take the kids!) 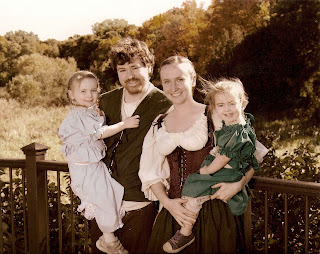 My husband, kids, and I love the Renaissance Festival! (yes, we are giant geeks, thankyouverymuch) For the past several years we've been season ticket holders. During fest season you can find is at fest most every weekend day, for at least part of the day anyway (each year the kids' staying power gets stronger and we can stay longer). We've got the costumes (aka garb) and swords and everything. And we're super lucky because the Minnesota Ren Fest is one of the biggest festval sites in the whole country (but there are many more, check it out). But still, some people have somehow managed to go their whole lives without giving it a go. Let's change that for some of you, shall we? I present for your enjoyment and education: 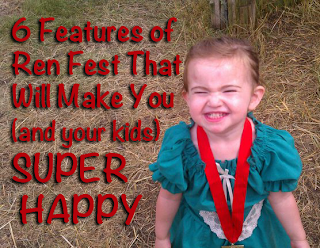 1. The Entertainment - There are a ton of different shows and street performances at the festival. There's humor for adults (like Vilification Tennis, where people hurle insults across then net instead of balls - although some of the insults are about balls) and for kids (like The Whacky Chickens, which despite having seen in a dozen times still gets laughs from the kids... and me.) Our favorite shows though are the musical performances, they can be fun and bawdy or sweet and relaxing (I like fun and bawdy best). I have friends who sing for one group there, DeCantus, and the kids love their music (which they call "fest music") so much that we listen to it year-round (hurray for the modern convenience of CDs)


2. The Costumes - Dressing in "garb" is one of my favorite parts of going to fest. Sometimes I wish I could wear it year-round. But even if you don't have your own costume, part of the fun of fest is admiring the amazing clothing all around. In particular I love the women's clothing. We ladies look hot in these clothes. I don't know if it's because the corsets cinch our waists and thrust up our boobs, or because the big skirts hide our badonkadonk butts, or maybe it's because of the way we hold ourselves as we strut around in this fabulous garb, but something about it just makes me ridiculously happy. And then there are the men. Yes, there are men in codpieces, and yes, I could live without those. But then there are men like my husband who look rugged and awesome. Especially on a hot day when hubs doesn't wear a shirt until his vest... yum. And kids, well that takes little to no explaining. What kid doesn't want to run around all day dressed up as a princess or a knight or a pirate?

3. The Food - If you're a health nut or a culinary snob, this might not be a draw. But if you appreciate food of the on-a-stick variety, you will enjoy yourself. My family loves the giant turkey legs. We can get one of those and all share it and be quite satisfied... until it's time for cream puffs and popovers, which my daughters and I devour while my husband gets himself some fried cheese curds. Since we go there a lot, some days we do pack our own picnic lunch to eat outside the gates, but if you're only going once or twice a year, you should really dive into all the fabulously unhealthy options (and FYI: the bread bowl soups are never as good as they look).

4. The Booze - But forget about food, let's talk about the most important consumable: booze! Fest is filled with it, specifically beer and wine, although a blini is always a good way to start the day. If you've read my Vegas post, you'll know I'm a big fan of the good ol' walking-around drink. Strolling through the grounds with a big mug of beer on a lovely late summer's day, what could be better than that? And how does this make the kids happy? Well, if mama's happy, everybody's happy, right?

5. The Animals - Our festival is full of animals and our kids LOVE it. There's a farm petting zoo with sheep and pigs and goats and chickens, even a giant cow. There are animal rides: horses, elephants, camels, llamas... and let me tell you, a toddler riding a llama is just about the cutest thing ever (but bring your ATM card, animal rides can be pricey). The Minnesota Herpetological Society is there each day with snakes and turtles and lizards that the kids can pet as well. There are also animal shows: the raptor center bird show, the arabian horse show, and my personal favorite, the sheep herding demonstration. I've been ro real zoos with less exciting animal offerings.

6. The Culture - Of all the things, it's the overall culture of fest that is the biggest thing that keeps us coming back week after week, year after year. The people who work there are welcoming, and the atmosphere is filled with light-hearted fun. The kids never get sick of being called "princess" (when they aren't playing in the dirt, then they prefer to be called "mud children"). It also gives us a chance to give them some feeling of freedom/self-determination, because they each get an allowance during fest, and that means they decide for themselves how they want to spend it (we give them enough for either two small rides or one big ride, and if they save money between sessions then they can do more on one day or even buy something special) And it's one place in the world where chivalry and insane pick-up lines are funny and don't feel awkward. It feels more like a big, crazy family.