How many mistakes can 4 college kids make in one road trip? 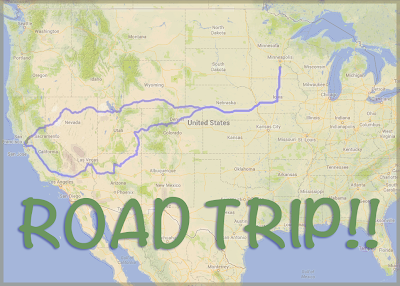 Back in college, my 3 best friends and I took a road trip from Minnesota to San Francisco by way of the Grand Cannon and Las Vegas. There were more than a couple mistakes made along the way. It was a crazy fun road trip (emphasis on crazy), even if we did do almost $1,000 worth of damage to the car, even if we did make a lot of mistakes. That's what you do when you're young, isn't it? (make mistakes, that is, you don't have to damage cars). But let's start at the beginning. Before we even hit the road we made a tactical packing error, by putting a cooler full of glass beer bottles in the trunk of Ethan's old car. Bump, bump, crash. By our first rest stop there was no more beer. An inauspicious start to be sure.

Our next mistake was believing that we could drive through the night during a snow storm in Nebraska.  You know you're a stupid college kid when it takes you until your tires can barely make traction to start looking for a place to hunker down. We finally pulled off the highway and miraculously made it up the exit ramp and into the parking lot of an old motel. Exactly the type you see in horror movies. And they were out of functioning rooms, functioning being the key word. They had one room with no beds (only mattresses on the floor) and a broken shower, not legally occupiable, that we got for $25 for the night. I'm amazed we didn't get flees.

Our third mistake was letting somebody who had never driven stick-shift before drive Ethan's old manual Volvo. Within minutes (minutes!) of taking the wheel she let go of the break before engaging the gas and we rolled back smack into a semi truck, smashing the tail lights. For some reason she got to continue driving. And it was fine... until we needed gas, at which point she pulled up to the pump and ran right into the cement barrier post, with just enough force to crack the front bumper. That was the last time she drove the car.

Thinking about it, I should correct my earlier statement; our first mistake was planning a road trip predicated on the idea that we could just show up at the Grand Canyon in mid-March and get ourselves a nice cozy camp site. When we did arrive at one of the most beautiful places in America (it really is, you should visit), we realized our mistake. So we took some pretty pictures and hit the road again, this time headed to Las Vegas.

And that was, in a way, our next mistake. Las Vegas is really fun (as I've said before)... once you're 21. Three out of the four of us were under 21. And the one person old enough for drinking and gambling, my beloved future husband, didn't even want to gamble. He was eventually persuaded to put $5 into a slot machine. He came out 25 cents ahead and that was that. We did have some great food at the Paris buffet and a Korean bar-b-que, but that wasn't enough to entice us to stay, so instead we headed on to San Francisco. That part wasn't a mistake, luckily. While there, the fourth member of our crew got to meet up and fly back to school with her boyfriend. And I got to visit California for the first time. It was lovely (although there were many, many hobos).

Our final, and possibly scariest mistake, was again thinking that driving through the night across the western states. Nebraska must have really hated us, because we made it that far before the sleep deprivation and excessive consumption of Blue Ox (a Red Bull knock-off we decided was totally awesome) took their toll. I was driving, and driving pretty fast, when snow blew in quite suddenly (if you've never driven though Nebraska, know that is is flat as hell, and thus incredibly windy, ideal for instant white-out conditions). Before my sleep-deprived brain could react and slow down there was suddenly a semi truck right in front of me. I swerved, my life flashed before my eyes, and then we were in the median ditch. A post knocked off one of the side-view mirrors, but we came to a stop unharmed. We even managed to push our way out of the ditch... once we woke up Josh, who had somehow slept through the whole thing in the back seat.

Luckily that was our last mistake and we made it back to Minnesota in one piece.
Published Thursday, June 27, 2013
Email ThisBlogThis!Share to TwitterShare to FacebookShare to Pinterest