I Can't Do That, It's Covered In Spiders 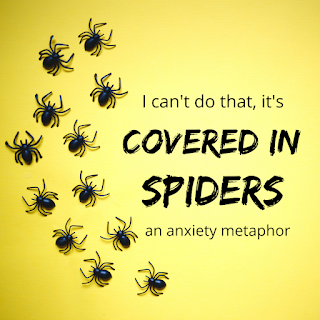 Anxiety can make some of the most basic, simple tasks seem impossible, even downright frightening. It doesn't make any sense. There is no rhyme or reason behind it. One metaphor I like to use to both describe it and identify it as an anxiety response is "that thing is covered in spiders." Need to make a phone call? Can't, it's covered in spiders. Put on pants? No, those are filled with spiders.

It's a solid metaphor for me because I hate spiders. They freak me out. Even when I know they're a harmless sort of spider. So when I think about an everyday task and it fills me with that same mixture of discomfort and fear, I know it's the anxiety talking. I think "oh, no, that's scary, icky; don't touch, don't even look" is a pretty common human reaction to spiders. That is not a normal human reaction to refilling a prescription. However for me, prescription refilling, for whatever reason, is usually covered in spiders.

This is not the same as executive disfunction. Executive dysfunction is knowing you should do a thing, and wanting to do that thing, but not being able to. Not out of some baseless unknown fear, but just because you can't. Maybe you can't get started, maybe you can't stay on track, maybe you just get routinely side-tracked. This can crop up due to depression or as an effect of ADHD and it's annoying AF.

Depression is a whole other can of worms that I'm not going to go into. But I will say that the non-depressed version of executive dysfunction can be worse than the anxiety spiders, in a way. If I can't get something done due to executive dysfunction, I probably won't ask for help. Because I know I can do it. I should be able to do it. So why ask for help. I'm sure I'll be able to do it any minute now... any minute. Or just not right now. I'll do it later. But I believe I can and will do it. Eventually. That's like why I haven't taken my meds yet this morning. I will, just in a second. After I do this thing. (I'm on thing 3, but it's okay, I'll do it after this).

Once I've identified something as being blocked by that covered-in-spiders feeling, then I can find a workaround. Can't wear pants? Wear a skirt! Can't do the dishes? Leave the kitchen! Or I can ask for help. Asking, "Hey, can you call in my prescription refill?" is about as embarrassing but doable as asking, "Hey, can you get this spider out of the shower?" And I am fortunate enough to have lovely supportive people in my life who will help when they can and won't berate me or make me feel bad for my inexplicable fear of making phone calls. I'm also fortunate enough that my anxiety is managed fairly well these days. So the spider infestations are not as frequent as they once were. And when something does set off my anxiety, I can tell myself that the spiders won't be there forever. Get help, get through the day, and pay it forward in the future.