Fan-fiction: The gateway drug to writing

I don't remember my first time writing fanfic (or reading it, for that matter). I have to assume it was Star Wars. In junior high, I wrote this amazing (read: mega cringe) story where Luke Skywalker crash-lands on a sparsely populated planet. He is, of course, injured and therefore must be cared for by a local farmer and her beautiful daughter, Antikee. Antikee was my own alter ego (*shocking*). And if you knew anything about 13-year-old Alison, you can rightfully surmise that Antikee and Luke totally boinked.

Sadly I don't have that story anymore. I do, however, have a nice collection of my teenage fanfic—mostly X-Files stories. There is a super-painful-to-read X-Files/Indiana Jones cross-over with this paragraph in which I demonstrate just how much I sucked at spelling when I was young (I still suck, but not quite this bad).

Now Indiana proseeded with caution.  He looked where her stepped and was careful not to snagg any wires.  Without furthur mishapes he made it to the chamber he had been seeking.  Inside this cavern sat a small statue on a stone pedastool.  The stature had been hand carved in pipestone.  It was the last known piece of it’s kind that had not been taken illiaglly and sold to “collectors” for profit.  It was the kind of thing that belonged in a museum.

I never finished that particular story (I like to think that's why it's in such dire need of proofreading). None of it had seen the light of day until now. But I did finish and share many a fanfic. I even published several stories online to fanfic pages long since lost in time. Apparently this is very common among writers.
I haven't written fanfic in a while, but now that my kids are into it, it's on my mind more often than it has been in years. What is it about fanfic that is so alluring to readers and writers alike? I think much of it is the comfort of familiar characters and worlds. Writers will talk ad nauseam about how much they love world-building or character development. But with fanfic you lean into preexisting worlds and fully-fleshed out characters. You can write dramatic interpersonal situations without spending the time building the backstory needed to make those situations make any sort of sense.
I was a big writer of Mulder/Scully romance. When I go back and read some of the things I'd written, now that I am so far removed from "X-Phile" life, things that made me swoon back then fall completely flat. If you aren't immersed in the sexual and romantic tension between Mulder and Scully you don't really feel the release of that tension—that "ahhh, finally" sensation when those two sexy FBI agents set aside pretense and get down to it.
The ability to rely on the works of others makes fanfic a fantastic gateway into writing. If you're paying attention, it might also give you some clues as to the type of writing you might be best suited for. Yes, I wrote primarily sci-fi fanfic, but I didn't do much to add to the fantastical, paranormal, or extra-terrestrial landscape. Naw. I just wanted to see my favorite characters make out. So why did it take me so long to realize that I really should be writing romance or at least stories with romantic components?
I didn't truly put two and two together until I was writing fanfic of On Ice (yes, fanfic of my own damn book) and "shipping" my characters. But looking back, it should have been so clear. And it makes me wonder what other writers have gotten out of their fanfic adventures. 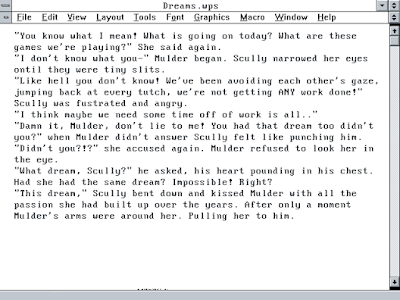 (I liked to rock it old school on our early 90s IBM)
Published Monday, August 16, 2021
Email ThisBlogThis!Share to TwitterShare to FacebookShare to Pinterest