In one end, out the other

Once upon a time, when I was in Inner Mongolia, I almost died. Actually no, that's an exaggeration. Let's start over.

Our group of 25 college students were visiting the ancient great wall on the boarder of Inner Mongolia. When a large group of Americans travels in China they are bound to end up in awkwardly forced cultural exchange moments. We ended up in a Mongolian restaurant (y'all, this was nothing like the Mongolian barbque back in Minnesota, I promise). After we awkwardly accepted the booze they litteraly poured into our mouths, we started to eat. I grabbed a slice of green  bell pepper and popped it into my mouth.

It wasn't a bell pepper. It was hot. And I had no spice tolerance. So I cried. Bawled even. And I scared the shit out of our local hosts. My Chinese was not very good at this point. I couldn't say "I feel like I've eaten molten lava which set my face on fire and is killing me from the inside out." All I could do was squeak out la, the word for spicy, in between sobs. The sweet women in the restaurant brought me every beverage they had in the place, along with more rice. Eventually I recovered, but was more than a little embarrassed. I'm sure they all thought I was the most pathetic creature. (although at least they didn't laugh at me like the men on the train did when I ate that spicy ramen... but that's another story) 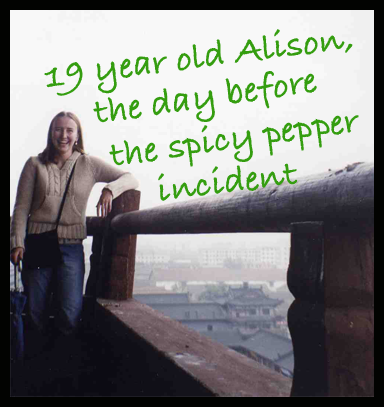 Anyway, that's when I knew I had to do something. Fix this flaw that had me crying in restaurants. I had grown up in Minnesota, where it was easy-peasey to avoid anything spicier than ketchup. But now I had a mission.

Over the years I did build up a much better tolerance. Impressive even. When we had a chili cook-off at work my chilli was the spiciest! I've learned to love jalapeños, Sriracha, and even tried the Blazen Wings at Buffalo Wild Wings.

Then I learned a new lesson. Turns out, you can train your mouth, but you can't train your butt. ...that sounds dirty. Let me explain, with a story. One day my friend Paul brought some habanero beef sticks to our football gathering (Go Vikes!). They were pretty damn spicy. Right at the edge of my tolerance  BUT they were also really tasty  and they went well with beer, so I had a couple. I lived to regret that decision.

The next day. At Work. The habanero made itself known again. It was like giving birth to Satan. It was worse than eating something too spicy, because nobody is going to run and get you a glass of milk for your ass. I'm sure many of you have experienced this unpleasant... event. Fun, right? Yeah. No. So I've decided, I'm done pushing myself to try new and spicier things. (it's hard to wrap up a story about spicy poop.) The End.
Published Friday, March 22, 2013
Email ThisBlogThis!Share to TwitterShare to FacebookShare to Pinterest