I love food. Especially the eating part, but also the cooking part. My husband also loves food, almost exclusively the eating part. I think this is a major reason my husband and I work (although there have been a number of fights about this dishes, not gonna lie).

It's hard to remember now, but once upon a time we were a young couple with disposable income and without kids. It was a short-lived time in our lives, but we made use of it to travel to China, Japan, and Italy. During those trips the major focus was always the food. In fact the rest of the trip was basically "ok, what should we do until it's time to eat again?" 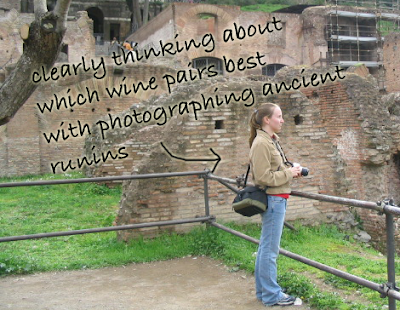 One night in Italy, we went to a nice restaurant for dinner. We had anti-pasta, pasta, probably something else without the word pasta in it... but more importantly, we drank wine. Lots of wine. After that we were a bit tipsy, so when I saw a Chinese restaurant on our walk back to the hotel, I OMG HAD TO EAT THERE!

When I go abroad and I don't speak the local language, I get kind of anxious, like I think everybody is going to assume I'm a dumb American who can only speak English and only eats pizza or hamburgers or something. I feel like they all judge me. I wanted to rectify this by learning every language in the world, or at least Italian, since I was going to visit Italy. But then I discovered that you really can't learn Italian from a CD-ROM, no matte what the infomercial says, so I gave up on that and went to Italy anyway. But that language-based anxiety is probably what lead me to insist we go to the Chinese restaurant.

At the restaurant, encouraged by the wine, I just couldn't stop talking to everybody in Chinese (everybody that worked there, that is, I wasn't talking to random Italians at other tables in Chinese, just wanted to clarify) The serving staff were pretty impressed and very happy to talk to me. It felt like a cool drink of water when you've been thirsty for days.

That sounds a little sad, but that's how it feels to get praise after you've been walking around displaying your ignorance and being met with looks of distain and judgement (real or imagined, it feels real, but others tell me I'm just being paranoid. But seriously, I've heard Europeans talk about Americans, and I'm pretty sure they think we're idiots. I've met many Americans who are idiots. And this was during George W Bush's presidency, so "idiot" was kind of our international persona).

We paid for my linguistic self-satisfaction by buying and eating and entire second meal, including a couple bottles of Tsingtao beer. I'm not entirely sure how we found our way back to the hotel afterward, all bloated and drunk, but we did. All I remember after the Chinese restaurant was thinking everything was really, really pretty and taking lots of (blurry) photos. And it was awesome.

I tried to repete the same experience when we were in Japan. But it turned out the only Chinese person working at the Chinese restaurant we went to was a timid dish washing girl, and I think I just embarrassed both of us. So we won't talk about that. I'm not even sure why I mentioned it. This post just sort fo got away from me.
Published Tuesday, March 26, 2013
Email ThisBlogThis!Share to TwitterShare to FacebookShare to Pinterest