If you didn't grow up with yearbooks, they're like time capsules on paper, attempting to catch the year and freeze it in time so that we can all go back years later and flip though its pages and reminisce about chess club, or laugh at our totally dated hairstyles, or show our kids the picture of that guy we had a crush on in 8th grade. But all the official stuff, the things that make it past the yearbook committee, are usually ignored in the days right after they've come out, because what really matters, more than how many times your name is mentioned or how many inside jokes made it past the yearbook police, are the signatures. 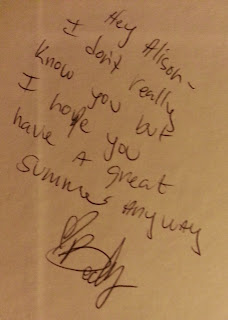 I don't know if my teachers even bothered to try and teach class on the day the yearbooks came out in my high school, because once the signing frenzy started, it got kind of intense. People would bring special pens, have signature catch-phrases, draw elaborate pictures (one year I signed all my friends' yearbooks with the lastname of the boy I had a crush on, rather than my own. I'd love it if somebody could send me a picture of that embarrassing choice). There was something electric and exciting about yearbooks, even to those of us who usually snarked at school traditions like pep rallies or class photos (several of my friends had to have their fingers blacked out in the official photo).

I was a pretty shy kid in school. I mean, I was loud and crazy around my friends, but in most of my classes I was pretty much silent. I also rarely seemed to have friends in my classes (big high school, remember?) so although I loved signing my friends' yearbooks at lunch or after school, when it came time for in-class yearbook signing I never really knew what to do. But thankfully (/sarcasm) in 9th grade I got the lesson (pictured left) that if you want to not spend the day trying not to cry, don't hand your book to bitches you've only known through class. Even if you were tech lab partners. Whatever. I'm not bitter or anything.

But that really isn't my biggest pet peeve about yearbooks. You know what is? HAGS. No, not old crusty women, I mean the acronym for Have A Great Summer, the most lazy thing you can ever write in another person's yearbook. It not only says "I have no personal connection with you" but also "and I'm too lazy to even write out 4 full words, that's how little I care about you." All while hiding behind a friendly smile. It's a beautiful example of the dark side of "Minnesota Nice". What it should really stand for is Hate you, Asshole. Go Suck it.

Maybe I'm being dramatic. I do concede that people might not hate me as much as the thought monkey tries to make me believe. But still, HAGS is lame and sucks. I hope it died out along with bad 98 Degrees references and other relics of the late 90s.

I really do love my yearbooks, especially the notes from my friends. One bonus of going to a big high school was that there were friends to be had, wonderful friends, even for weirdos like me. (Actually, people used to call us the Window Weirdos, because we hung out by the front window of the school... and were weirdos)  I loved my friends, and back then I thought we'd always be friends like that, laughing, and teasing, and grabbing each other's boobs. Some of those people I'm still actively friends with in real life, but with most we just get a glimmer of each other over facebook. So I guess that makes the yearbooks even more special. Those notes are like a freeze-frame of our friendship, something tangible and sweet and worth keeping forever. (Aww, that got sappy. But really, I love you guys. Let's go get a drink together some time.)
Published Tuesday, April 09, 2013
Email ThisBlogThis!Share to TwitterShare to FacebookShare to Pinterest