When a cat person gets a dog

I'm a cat person. I mean, in the sense that if the world was split into cat people and dog people, I would have to go with the cat people. It would be the honest thing to do. I've had cats most of my life. The first was Toto, he we left with friends when my family moved. Then we got Kitty. She had a bad habit of sunbathing in the middle of the road. You can guess how that ended. Sheba, the final family cat of my childhood, was not allowed outside and managed to live to a ripe old age. Like pee-next-to-the-litter-box-because-she-was-too-old-to-climb-in old. 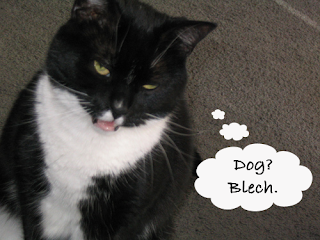 Ethan and I got two cats 2 years before we got married. So I guess technically they're his cats, since I was still a student and we didn't live together, and that's why he cleans the litter box. They are Arwen and Eowyn. Eowyn is insane, certifiable. She hates everything except food, so she spends most of her time hiding in the back room where her food is kept. She doesn't come out often, and when she does, I have to admit I'm a little terrified of her. It's like having Gollum living in my house. A fat furry Gollum who loves food instead of the one ring.

Arwen is awesome. Best cat ever. Couldn't ask for more. Unless you hate cats, in which case she wouldn't be a good thing to ask for. She is aggressively friendly. She'll smash her skull into you until you pet her. She doesn't bit or scratch or hiss at people. She's totally cool with the kids. She just loves people and loves attention. I always said she was like a dog. Until we got a dog. Oh lordy...

Actually our experience getting our dog was not too dissimilar to the story of Crappy Dog. Only thank god I didn't have to spend much time on the phone (the Thought Monkey does not like the phone) and instead spent time filling out various applications that asked things like "how big is your yard?" "what kind of food will you feed the dog?" and "what are your thoughts on the 1931 Japanese invasion of Manchuria?" Seriously, the forms were intense. Also, I couldn't sleep because of all the judging I knew people were doing of me. But we got approved. Eventually. Then we got the run around about specific dogs. So I gave up and we went to the Human Society and that's where we met Bones (only his name was McGee at the time).

What were we thinking? We still don't know. Bones a little 16 lb terrier mutt. He's house trained (mostly, there've been a couple accidents) and crate trained (of course like the day after I write that down he fucking pees in his crate. Of fucking course.). He knows how to sit and lay down and come when called. He does not know how to stay. He loves to fetch and run and tug. We have no idea what we're doing. But we're learning. And we love him. Even when he pooped on the floor and tried to eat it that one time. Dogs, man.
Published Friday, March 29, 2013
Email ThisBlogThis!Share to TwitterShare to FacebookShare to Pinterest