I is for Injury - EPIC Injury.

If you are squeamish about talk of medical procedures/injuries/blood then you might want to skip this post. I talk about slicing my leg open with a hockey skate. You've been warned. 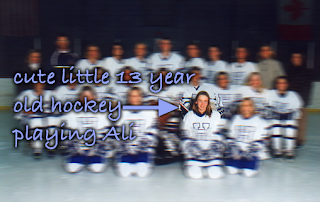 Give blood, play hockey. You can get that slogan on t-shirts, hats, and bumper stickers. It's accepted that hockey is a dangerous sport. But if you're not playing in a league with fighting, it's really not so bad. You're covered head to toe in pads, after all. I've played ice hockey since I was 10. And in those two decades I'd only really gotten badly hurt twice. One injury was a bad AC pull from a hit, and the other was a concussion. Outside of that nothing bad enough to send me to a doctor, just bumps and bruises, and that time I lost a tooth on the ice (it was a baby tooth).

So there I was, going along my merry way, happily playing hockey uninjured. Until this February. (this is where it starts to get gross) My skate bald had cracked earlier that week, but I didn't have time to go get it repaired, and since it wasn't actually cracked all the way through to the plastic, and since I had already skated on it for at least half a game with no problem, I figured I'd just play anyway and deal with it later. This was a bad idea, and come to think of it, probably against USA hockey rules.

Now, I don't know for sure that the cracked blade caused what happened next but it seems like a weird coincidence otherwise. So like I said, going along my merry way, playing hockey, on a cracked balde. I was skating hard at a defenseman who had the puck, she dumped it away down the ice, and I took a hard turn to follow the play. Everybody else turned and went down the ice. I fell. And something hurt. I looked down at my leg and saw that I was bleeding through my hockey sock, on my thigh near my knee. I knew I'd cut myself. I yelled for the ref to blow the whistle, but I was so far from the play he didn't see me. So I got up and hobbled from the ice over to my bench. That hurt. A lot. (And in the mean time the other team got a goal! I mean, WTF?)

I was so, so scared at that point but I was also being pumped full of endorphins by my body. I got to the bench, peeled back the sock, and saw the worst thing I've ever seen in my life. To be honest I expected a bad scrape, or maybe a real cut, I was not prepared to see the inside of my leg gashed wide open. I will never forget the sight of my flesh sliced cleanly through, fat and flesh laid open, with a glint of bone visible deep within the crevasse. (I might pass out just describing it)

I still had all that adrenalin and stuff, so I started screaming at people to help tie a tourniquet on my leg and call 911. My teammates were AMAZING. They Held me up, in case I passed out, they brought me a bucket, in case I puked, they called my husband, and most importantly, they made me feel cared for. At this point I was holding my leg together with a death grip, imagining that if I let go all the meat would just fall off the bone like a well-cooked drumstick. Finally the EMTs arrived. They made me let go of my leg so that they could see. They told me not to look. I did anyway. And that's when I puked.

Endorphins are really amazing, y'all. For most of the ambulance ride I was able to be calm, answer questions, and laugh at the EMT when he bragged about his IV skills then took two needles and a million stabs to put in a line. The pain was just starting to creep up when we arrived at the hospital. But once it started to spike, I went from chatting to screaming and bawling so loudly they had to close the door in the space of a few minutes.

It seemed to take forever, but I eventually got a few doses of morphine. Unfortunately at this point the panic attack had already started to mount. I felt like an idiot. I kept apologizing. I swore I'd never let my kids play hockey. The doctor ordered nitrous oxide to help me calm down. I think they put the mask on wrong, because it did NOTHING and it was really hard not to hyperventilate with that mask on. I was having the worst panic attack of my life, and really, really scared. I felt like I was going to die. Eventually they gave me ativan, right into my bloodstream. That did the trick. I was able to come down from my panic attack and sit still while the doctor stitched me up. (She did not like me, maybe because I yelled at her not to touch my leg, but she's just lucky the nitrous oxide didn't work, because I'm pretty sure I would have said everything on my mind, and I was not thinking nice things about her as she poked and prodded at my gaping wound.)

So that was that. All the medical personel told me how lucky I was, because although it was deep, it had missed all the major arteries and muscles. It took me a few days to be able to walk without crutches, and a while more not to limp, but I'm a quick healer (one reason why I can never keep my ears pierced, they just close up. I'm like Wolverine) and one month later I played hockey in the state tournament.

It still makes me ill to think about, and I still have panic-inducing flashbacks time to time. But I'll never stop playing, I'll never stop hoping my kids play. Hockey is the greatest sport on earth, and injuries like these are extremely uncommon. If I do it to myself again in 20 more years, well, I'll just be thankful that I've played long enough to get there.