Some days I want to move to Neutopia 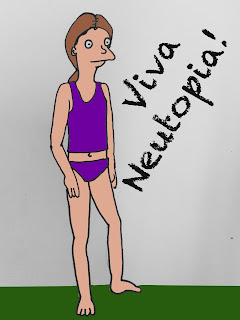 There's an episode of Fururama called "Neutopia" in which the Planet Express team takes a group of commercial airline passengers and they all crash-land on a planet, where they are forced to compete based on sex/gender. They prove to the aliens that the genders can not get along, so they eventually end up all neutered, and get along splendidly (until they all demand their "wingwangs" and "kajiggers" back).

Sometimes, especially when I'm in a bad mood, I will think about that short lived "Neutopia" and how wonderful it would be if The Borax Kid (one of the aliens) would visit our planet and just neuter the lot of us. Just  blast out all those pesky primary and secondary sex characteristics. Do away with our hormone-fueled stupidity. Think about it. No more rape. No more gender discrimination. No more sex trafficking. No more periods. No more "boys like trucks and girls like dolls". No more "don't be a pussy" or "grow some balls". Nothing left to feminist rage about. Wouldn't that be splendid?

Yeah, sure, we might *miss* sex. And there'd be the small problem of figuring out how to reproduce a-sexually. But when I read a story about another teenaged girl being gang raped then bullied until she committed suicide, and I know that just barely scratches the surface of the sick, cruel, evil ways women and young girls are treated the world over... Well, having an alien come down and banish all the genitals on Earth sounds like a pretty nice idea.

It's not going to happen. Penises and vaginas are here to stay. And sadly, so, it seems, is sexual violence. But we, as individuals, can do our part to fight against gender bias and discrimination. We can choose to get consent before engaging in sexual behavior. We can teach our children to respect their bodies and the bodies of others. We can make a difference in our lives and the lives of those around us.

Those of us with daughters are all too aware how important it is to teach them how to protect themselves. Even though my girls are only preschoolers, I already think about how I'll talk to them about things like watching your drinks so you don't get roofied, and using the buddy system when you're out after dark, and that there is help available from friends and family, and that they never deserve to be treated like anything less than a human being because of their female bodies. They should know that consent is important and goes both ways. The golden rule is golden for a reason.

I can only hope that the parents of every little boy is thinking about the same talk, and teaching them how to treat women like human beings deserving of respect. No woman is ever "asking for it" just because of the way she dresses, dances, or drinks. Asking for it must be just that, verbally asking. This doesn't just go for full-fledged sex, it also goes for unwanted touching, comments, etc. When somebody tells you you've crossed a line, believe them. And for the love of god, don't roofie somebody. Don't rape somebody. Don't harass somebody for being raped. Don't take pictures of somebody getting raped and share them with your friends. People do these things in our cities and towns in our country EVERY DAY. And that is just evil. YOU are just evil, if you partake. Seriously. What. The. Fuck? It's hard to write about this stuff without getting all HULK SMASH.

Maybe one day humanity will figure it out. Until then, I'll  be dreaming of neutopia.
Published Tuesday, April 16, 2013
Email ThisBlogThis!Share to TwitterShare to FacebookShare to Pinterest