The April A to Z Challenge is wrapping up and so far it's been pretty good. There have been a few weak posts, but I've never felt as stuck on a letter as I did with U. And I really didn't want to go with the word uterus. I fought the idea. But today I woke up to horrible evil cramps. And every time somebody at work said "how are you?" in that polite casual way, I wanted to scream "my uterus is trying to kill me!" (but I didn't) so I guess the universe is telling me to write about my uterus. Thanks, universe.

Women are pretty bad-ass for putting up with this evil organ. Men complain that getting hit in the nuts hurts a ton. But try to imagine (if there are still any men reading this) knowing that every 4 weeks you would get three days of nut-punches, and that there was nothing you could do about it. And this will happen every 4 weeks from the time you start puberty until you hit your 50s (barring times when you are growing humans in your nutsack, ok this analogy has gone too far). That would suck, wouldn't it? So be nice to the PMSing woman in your life and pray that I never find a magic genie while I'm on the rag, because my first wish might just be to grant you all that lovely experience. 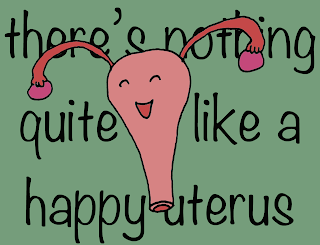 My uterus is pretty cool in some ways though. It did grow two wonderful children. I wasn't a fan of the growing process, but I am grateful that my uterus did such a fabulous job making those big, healthy, beautiful babies. I hope my uterus doesn't take it personally that I want to cut it out and throw it away, now that I'm done having children.

Can you do a uterus organ donation? I'm such a giving person, I would totally give you my uterus. Are you in the market for a pre-owned uterus? It's a pretty well behaved organ, most of the time. It doesn't fight with the other organs. And it only throws tantrums about 3 days out of every 28. And all the surgens who cut it open totally told me how cute it was.

Ok, this post got a little bizarre. I guess blogging and PMS go together like eating doritos dipped in chocolate frosting (at first you're like eww, then you're surprised how good it actually is, but after a while you start to regret it). I bet you can't wait to read what I have in store for the letter V.
Published Wednesday, April 24, 2013
Email ThisBlogThis!Share to TwitterShare to FacebookShare to Pinterest