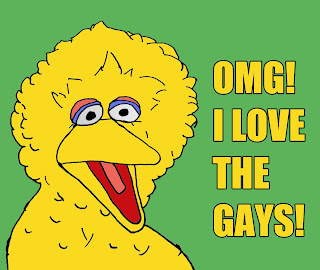 This is, like, pretty much one of the hardest topics for me to write about. That's why, although I made the place-mark for it weeks ago, I haven't posted anything about it until the letter Q (today's assigned letter for the April A to Z Blogging Challenge) forced my hand.

Q is for queer. Back in the old days, if you were called queer, you were being called strange, weird, odd. In the classic Sesame Street song ABCDEFGHIJKLMNOPQRSTUVWXYZ, Big Bird sings the line "it's awful queer to me!" and that's my favorite part of the song. I am certainly queer by that old definition. I am an oddball and I like it. But that's not what I am posting about today. Today I'm posting about the other queer. The gay kind.

First, let me say, I am in love with this definition of queer from the PFLAG website:


Think of queer as an umbrella term. It includes anyone who a) wants to identify as queer and b) who feels somehow outside of the societal norms in regards to gender, sexuality or/and even politics. This, therefore, could include the straight ally who marches during pride, the republican lesbian, the person who highly values queer theory concepts and would rather not identify with any particular label, the gender fluid bisexual, the gender fluid heterosexual, the questioning GLBT person, and the person who just doesn’t feel like they quite fit in to societal norms and wants to bond with a community over that.

Many people I know and love fit that definition in some way. I would say I'm the "gender fluid bisexual" type of queer. Yup. There. I said it. Bisexual. It's like a dirty word to so many people that I avoid using it. There are so many stereotypes about bisexuals. We're promiscuous. We're not really gay. We are slaves to the binary gender construct. We just want attention. And I hate all of that. I'm none of those things. (Ok, so many I want some attention, but I don't think that is related to my queerness. That's just me bein' me.) That's why I like the word queer better. It's just so much more... flexible. It doesn't put me in a box (or maybe it does, har har, get it? box? vagina? queer women? ...bueller?). It gives me a little more leeway to define my own sexuality.

The reason it's hard to post about this is because, well, it doesn't really matter. I'm married to a man. I'm done with dating. And that's that. Who cares if the celeb I'm crushing on right now is Hannah Hart and not MANnah Hart? (I am on a roll today!) Do I try to make up for my very heterosexual life by being involved in as many lesbian stereotypes as possible? Like coaching and playing women's hockey, going to gay marriage rallies, and watching women's basketball? Maybe. Maybe I'll even buy a Subaru one day. But unless Ethan kicks it, or we discover that we're actually raging polyamourists, I'm pretty settled.

Being queer does make me feel a strong personal connection to the current politics concerning LGBT rights, like gay marriage and anti-discrimination laws. Sadly society still has a long way to go before it even truly accepts the "normal" gays, let alone all the people in other parts of the gender and sexuality spectrum. But there's a lot of work being done to make it better. I'm doing what I can and crossing my fingers that my great state of Minnesota will soon legalize gay marriage (you can too! call your local representative!). And whenever the world does take a step forward toward equality, it makes my heart soar. And damnit, there is no better party than a queer-filled party when we win a vote for quality! It may sound cliché, but Pride events are truly fabulous.