What is thinspo and why is it so dangerous

In my older post, Eat Right and Exercise... whatever that means, I put in this "This is a No Thinspo Zone" image. A few weeks later I was chatting with friends on facebook, because several of their Pintest accounts had been hacked and were displaying some pins I called out as thinspo. Then somebody asked me what thinspo is and it dawned on me that this might be a good subject for my blog. So here we go: What is Thinspo and why is it EVIL... 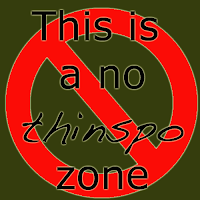 Thinspo is short for "thinspiriation" (thin + inspiration) and encompasses many pictures and sayings that are meant to encourage people in their weight loss pursuits. Of the face of it that doesn't necessarily sound entirely evil. Weight loss can be good when done in the right way and for the right reasons, and if there's some saying or picture that helps with that healthy goal, what's the harm, right? Well, that's not really what thinspo is all about. Thinspo is the tool of pro-anorexics (aka pro-ana) to not only encourage their own self-destructive behavior, but with the nature of the internet and social networks it also helps to spread the destructive idea that thinner is always better.

Pro-ana thinspo is filled with images of women with sallow cheeks, bones protruding so far it almost looks painful, images of thinness that reek of self-starvation. These pictures are often accompanied by words of "encouragement" and pro-ana slogans (such as "time wasting is never time wasted" - which is the only example I will give because it's the one that sounds the stupidest and hopefully isn't too triggering). And if your mind is healthy it's scary, it's disturbing, it's sad. But if you're suffering from your own body dismorphia it can be enticing, exciting, and very, very addictive.

And it's so easy to find. You could goole-search it (although I don't recommend it) and you'd find tons of sites, image repositories, message boards, and online communities all dedicated to thinspo and pro-anna encouragement. If you lurk on these sites (again, really, don't) you will find all that I've described and more. It's a disturbingly thriving community filled with women and girls (and some men/boys although not nearly as many, in my experience) who are desperate to look like Kate Moss, or Twiggy, or some even thinner ideal. They talk to each other, communicate their struggles, and urge each other on. They brag about not eating, or lament a pound not shed. The berate themselves publicly over their own "failures" and congratulate others on their "successes". They form pairs and groups and swear pacts to not eat. Just writing about it makes me sick to my stomach.

How do I know all of this? Because I've been there. I've spent time (often when I should have been eating lunch) pouring over pro-ana sites, saving my favorite images or memorizing little quotes to repeat back at myself later. And I used some of the worst of it to convince myself I didn't have a problem. Those girls were looking at thinner models, those girls were eating less, therefore what I was doing was fine. But guess what? It wasn't. And it still isn't. Even though I've stopped the destructive behavior, the thoughts and impulses are there. The Though Monkey still tells me I'm fat, gross, that people are talking about it, and that I should be ashamed, that I don't deserve to eat. And any hint of thinspo brings that voice to the surface (even the silly Medifast or JennyCraig commercials can get to me on a bad day).

So that, in a nutshell, is thinspo. I wish we could, collectively as a society, stop posting images or "tips" that focus on weightless above all, but I know that's not going to happen. I know I won't be able to completely avoid all the images and talk that smacks of thinspo. But I can stop from looking for it, I can avoid it where I can, and I can call it out when I see it. And I guess that's what I'm doing right now.

Published Tuesday, May 28, 2013
Email ThisBlogThis!Share to TwitterShare to FacebookShare to Pinterest