Why aren't there more women at the table?

It's pretty well known that women aren't as empowered in the workplace as men. It's not just that women are paid less for equal work, or the fact that we even have discussions still about how female breadwinners are destroying families (why does anybody watch FOX News?? http://marie-everydaymiracle.blogspot.com/2013/06/right-wing-mens-heads-explode-at-notion.html)

It really drives home the depressing realization that I'll probably never live to see true workplace equality, even in my own country. 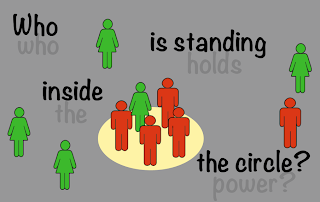 And I've been wondering what I can do about it, other than to teach my daughter's to be tough and stand up for themselves, what can I do about my actions within the workplace. One thing that has crossed my path is Sheryl Sandberg's book, Lean In. I haven't read it, but I've heard enough descriptions from NPR and people I know to get the general idea (at least I think I do). What I hear is that to advance in the workplace, women need to lean in, to sit at the big kids table, to be heard. And I see the lack of this, even in my own actions at work.

For example, I was recently at a book talk with a small group of very intelligent and generally awesome people.  At the talk there were 12 women, 13 men, so about even numbers overall. In the room there was one center table and then extra chairs around the periphery of the room. Because the speaker sits at the center table, it's the more powerful/coveted location to sit (also then you don't have to hold your lunch in your lap.) I sat at the table. I always try to sit at the table. I love the table. Anyway, I noticed that at the table there were 8 men and 4 women. (Ladies, why don't we sit at the table more? Please, come join me at the table.)

When we got to the question and answer session of the talk, right away the woman sitting next to me clearly had a question to ask. She raised her hand, and the speaker saw her and was about to call on her, but he didn't get the chance, because before he could four different men in succession just spoke out with their questions. The speaker answered their questions and eventually there was enough of a lul that women, all of whom (including me) approached more timidly, started asking questions as well.

None of this was happening with any sort of maliciousness on the part of the men in the room. But it got me thinking. Why are we so quiet? Why are they so loud? It might be partly how we were brought up, to be sweet, polite girls. It might be our nature (generally, there are plenty of outspoken women, obviously). But what I really want to take away from these examples is how I can do more to assert myself.

I've read some much more eloquent and point-driven posts than this on the matter, but my head is still a bit muddled by the realization of how truly unequal the playing field currently is. How despite being 52% population we aren't close to holding 52% of the money and power. Hell, we aren't even 52% of fucking movie characters. And I'm absolutely daunted by the idea of trying to fix that.
Published Tuesday, June 11, 2013
Email ThisBlogThis!Share to TwitterShare to FacebookShare to Pinterest