Pack up and move out.

First grade was the worst grade for me but also the best, and what happened that year has come to shape my life, and my kids' lives, in a way. When I was in first grade my family moved. I know a lot of kids get moved around, and this may come off as whining, but it was hard for me, so there. My family moved first into a rental house in our town, Groton, MA. The house had its upsides, it was near the playground and there was a trap door in the floor (although it was nailed shut it excited my imagination). But it felt awkward, even to little 6 year old Ali, because I knew the house wasn't ours and that we wouldn't be staying long. And we didn't. 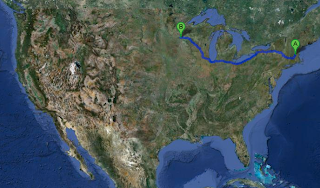 We left Massechusettes for Minnesota on a rainy Halloween night. Some days later we arrived in Minnesota, at our new rental home. I hated that house. When I think about it, my first thought is always of how the squirrels chewed up and ruined our Christmas lights. A cheery memory, no? It was a bleak winter. There was very little snow that year, so the naked trees on the flat plains of Minnesota seemed extra grey and dreary. Everything we left behind in Groton seemed so rosy in my memory, the yard the house, the people... I started to hate Minnesota. It took me years to get over that.

First grade itself was a challenge. I was a very shy and self-concious child, and I had not particularly enjoyed kindergarten, which had only been a half-day, so first grade would likely have been hard no matter what. But changing schools, and states, mid-way into the year, adjusting to a new ciriculumn (my old school had done well in teaching math, but I was behind in reading when I started school in Minnesota), and to taking the bus for the first time surly compounded my stress.  But on the positive side, I was lucky to have a fabulous first grade teacher. And I did make friends. My family made a lasting relationship with the family of a girl in my class, and that lead to some really fun times for years to come.

But we didn't stick around. After the school year was out we moved again to the house where my parents live still. The house where I fell in love with the great state of Minnesota. The house I now live only 3 miles away from. And as hard as it was, being brought to Minnesota ended up being one of best things that happened to me. I love it here. But the difficulty of the journey affected me as well.  I have vowed  to never, ever, if I can possibly help it, move my children while they are in school. I place a high value on stability and routine (that might be the OCD talking though). Some people can move a hundred times and it does't phase them. But I think I'll stay put and keep my traveling to vacations and conferences.
Published Thursday, June 13, 2013
Email ThisBlogThis!Share to TwitterShare to FacebookShare to Pinterest