The Improbable Story of Us

In one of my past posts, I promised the story of how Kristin and I got together. So here it goes...

It starts way back in 1999 in high school German class. Kristin and I both took German. I was also learning Japanese on the sly, getting the teacher to give me work, and even let me take quizzes over lunch even though I wasn't actually in Japanese class that year. Those were my favorite two subjects, German and Japanese, because I'm a giant language nerd. I was a pretty socially awkward teen but there were a few things I had some decent confidence in, and that included languages.

One thing I did not have confidence in was my sexuality. You see, there was this really cute girl in my German class. She was cute and blonde and cool and she did this thing where she would run her fingers through her hair that was... distracting. And I heard that she was bi. And due to some combination of all these things I just could not stop thinking about her. And that was a bit confusing as up to this point all my crushes had been on boys. But she was a girl. And her name was Kristin.

So I did what any girl would do when confronting the idea that she's not straight: I borrowed lesbian movies from the teacher who ran the school pride club. (totally normal, right?) I guess I figured that if the movies struck a chord it would somehow prove I was really bi and that this thing I felt for this girl in my German class was more than just curiosity. The movies I watched, alone in my room on my super cool TV/VCR combo unit, were But I'm a Cheerleader and The Incredibly True Adventure of Two Girls in Love. And well, I've had a crush on Natasha Lyonne ever since. So yeah, they struck a chord.

So there I had it, "proof" that I was bi. Of course, I didn't actually tell anybody about this at the time that I can recall.  I was way too scared. But I did do one thing. I summoned up all my socially awkward nerd courage and tried to flirt with that cute girl. The one who wore jncos, white t-shirts under button-down shirts, and glasses. The one who was quiet and petite and mesmerizing. The one named Kristin.

So, I sit next to her in the German classroom—in my memory, we're in the back of the room where there were some comfy sofa seating options—and I  get out my whiteboard marker, and on the inside lid to my metal lunchbox I write あなたはかわいいです。And I say to her, "I wrote this for you." (smooth, right?) She asks what it says. "It says you are cute." She looks at me (in my memory my heart is going like a jackhammer and my palms are all sweaty, I'm sure I'm literally shaking) and she says, "why did you write that?" And then allllllll my courage evaporates. In my head I'm like "she thinks you're straight, and you're acting like an idiot" so I clam up and that's that. The end of my one attempt to flirt with the first girl I ever liked.

I don't remember much else about that time but I always remembered her. She was forever the first step in the story of me figuring out that I'm bi. We hung out together a bit when we both had German exchange students but we were never really more than friendly classmates. She graduated in 2000, a year before me, and that was that. 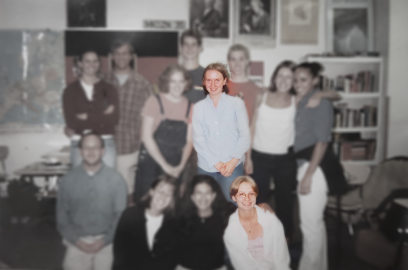 Years passed. I eventually gained more confidence in my sexuality, discovered polyamory, and began to date women. As one relationship was ending, I set up an OkCupid profile, in hopes that it would help me find a more substantive relationship than I had found via Tinder. (I was still crap at flirting with women in real life, I needed the apps, trust me). I even paid so I could message people once before they matched me.

One night before bed, laying in bed feeling a little drunk, I was looking through profiles and I saw this one woman. She was cute. Glasses, short blonde hair all styled up—she looked way too cool for me. I immediately assumed I wasn't her type, but in her profile she said that a good date would be hanging out watching reruns of The Office. So I was like, "hey, drunk Ali, send the cool cute lady a message, who knows, maybe she won't ignore you." So I started typing. While laying in bed. Drunk. And this is what I managed to get out before my stupid palm hand accidentally hit send:

Rewatching The Office whine teeing to figure out the tween thing

Smooooooth. I couldn't send a follow-up so I figured that was that and I'd never hear from her and I should take this as a sign to just go to sleep.

The next morning I woke up to a message on OKCupid that started like this:

Who would have thought after all this time that "this" would be the way we reconnect....

I looked at her name. Kristin. I did a double-take then shot straight up in bed. I don't know if I'd ever felt as surprised and dumbfounded as I did when I realized the girl I had messaged was the same girl I'd been thinking about for almost twenty years. It was Kristin. THE Kristin. The cute girl from German class was suddenly no longer just a memory but a real-life person who was messaging me. You could have knocked me over with a feather. There was a flurry of messaging and looking up yearbook pictures and pinching myself because how could this really be happening? I was so flustered I showed up an hour early for hockey missing part of my gear.

On the night of our first date, I picked up pizzas and wine and drove to her house. I was sooooo nervous. I arrived early so I basically drove around her neighborhood for ten minutes hyperventilating so that I would be exactly on time. She showed me her place, we talked about our paths to poly, we ate pizza and watched movies and played Blink. Her face when I beat her in my third try, I think I fell in love right at that moment. It was so wonderful it was surreal. It still feels surreal sometimes. She's Kristin. Kristin. And she's perfect.

And there's so much more I could say about falling in love and moving in together amidst covid and all the wonderful moments we've shared in the last ten and a half months. But I'll save those for another day maybe. I want to wrap up this post. Kristin's almost home from work. <3