The making of an Audiobook... or two 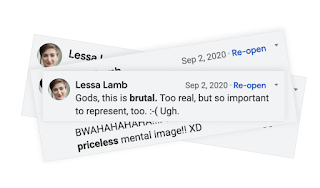 My second audiobook just came out and I thought it might be fun to share a little bit about the process. I worked with Lessa Lamb. She is not only crazy talented but she gets my jokes and appreciates my absurd geeky references ("I am a leaf on the wind, watch how I eat all the Cheetos.") Before she narrates something of mine, I give her the manuscript as a google doc and she comments on it as she reads. She's brilliant at finding little typos the editor missed, but the best part is when she leaves reaction comments to the story itself. If I had my way, all readers would give me reaction comments. It is literally my favorite thing in the world. I've had beta-readers do this too and it makes me beyond happy. 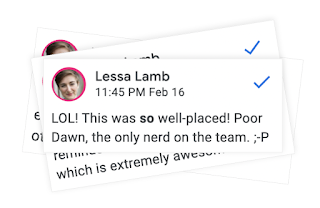 The google doc also gives me a place to add notes about how a line should be read ("it's more of a rolled eye fuck you than a pointed fuck you fuck you"), more details about the background of the scene, or what it's foreshadowing (hehe). These notes (hopefully) help her be in the right mental space when she does the narration. And that's what Lessa is KILLER at, being in the character's emotional space when recording a scene. I know it can be brutal, but it's what makes her so amazing. I'm not gonna lie, there are some hard times in these books for all of the main characters. Lessa brings those emotions alive in the audiobooks. She's made me cry and I wrote the damn thing.
Anyway, I was talking about the process... After we've had our little comment-fest on the doc we have a video chat (or three) to talk about character voices and just touch base with one another. She's really easy to talk to and it honestly feels like working with a friend. I am, as Fitz would say #blessed to work with such a cool person (which I almost don't want to say because I don't want any other authors taking more of her time; I want her all to myself. lol.)
After all this prep, Lessa hops in the booth and works her magic. Her sound guy goes over the files for technical mistakes and then pops them into the shared drive for me to listen to. I get to comment and decide which technical mistakes are worth changing and which lines I'd like redone for more... tonal purposes. I love this part too, although I feel bad every time I ask for a change. I'm pretty sure I was insufferable for the first book. These characters are my own little horcruxes; they mean a lot and it was hard to relinquish some control over them during this process. But Lessa was hella cool about it and I think I was much less of a pain in the ass during the second book.
Then Lessa goes in and re-records bits. We track it all on a nice little spreadsheet (seriously how did people function before google drive?) so that everybody knows what's going on. When it's done and the sound guy has done his magic it gets uploaded where I officially approve it before it moves on to be approved by ACX. And boom! That's it! Now my words and Lessa's magic voice are available for the world to hear. Literally.
Now the fun part is over (both of the process and this post). Here comes the worst part: marketing. AKA making sure people do listen to it. Marketing is my least favorite thing in the writing world. But ACX helps by giving me promo codes! So here's the deal, my friends: if you have a platform to promote me, I have free copies of the audiobooks available for you! I appreciate each like, comment, and share. DM me on twitter @alioffthemark if you're interested. 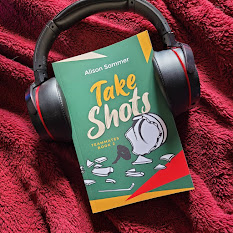 Published Wednesday, May 26, 2021
Email ThisBlogThis!Share to TwitterShare to FacebookShare to Pinterest