To every Cat there is a season

This month has been incredibly full. The low point was when Corky, Kristin's super sweet 17 year old cat had to be put down. Pets are family and Corky was an extra special member of ours, especially for Kristin who had Corky basically her entire adult life. We're at that age, Kristin, Ethan, and I where the pets we got as young adults are now departing this world. I lost my cat Arwen a couple years ago. Ethan and I had adopted Arwen and Eowyn together when we were 22 and 20 respectively. Now all that's left is Eowyn. She's old, deaf, loud as hell, persistently attached to Ethan's lap... and she's the last of an era.

But as some chapters of our lives come to an end, new ones begin. For Kristin and I, and the whole family really, the next chapter goes by the names Lola and River, our two new kittens. Lola is a tortoiseshell, just like Corky was. She's cute and energetic and has been trying to eat my hand while I type this post. She's Kristin's cat. River is a gray tabby whose favorite activities seems to be bolting from one room to another and climbing up into my boxspring. She's mine.

Lola and River will never replace Corky and Arwen, but they add something to our lives that was lost when we lost our old lady kitties. And they came along at the start of our own new chapter, less than two weeks before our wedding. It seems crazy—bringing home two new kittens just days before our wedding and on the same day my third book, Teammates: Full Strength, came out. Especially when you consider we already have two other cats (the aforementioned old lady Eowyn, and our kids' cat Hermione aka The Big Fat Fluff) and a dog (Bones). But in a way, that's part of what makes it special. It's a new season for us, and I think it's going to be lovely. 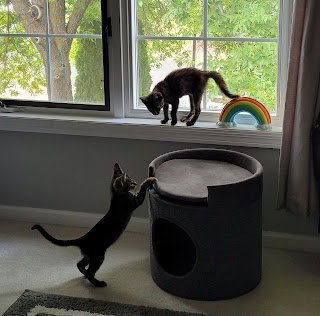