A to Z Challenge

Despite being fairly new to this whole public blogging thing, or maybe because of it, I've signed up for the A to Z blogging challenge. So now I am committed to writing 6 days a week through April with posts that take their theme from that letter of the alphabet. A to Z starts with A, so this is my first post of this crazy idea. It might be a boring post but I hate April Fools and so I'm trying to avoid the internet today.

I have to carefully think about how I am going to approach this challange, because I'm pretty sure I don't come up with ideas for posts based on the letters of the alphabet. My inspiration comes up fairly organically. 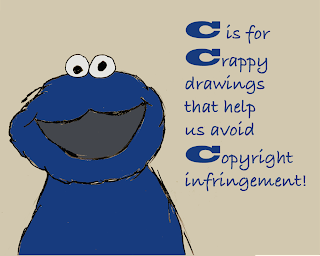 And by organically I mean, I run out of the shower dripping water all over the bedroom because I have to write down an idea, then a couple days later I look back at it and all it says is "impatient" and I wonder what the fuck I was thinking.

So I'm working on ideas and at least trying to categorize those ideas by letter. The more I work on this the more I realize what a terrible idea this was. That can be the post for letter T. Terrible. It feels like a really messed up episode of Sesame Street. With a lot more swearing.

Actually, come to think of it, do they even do the whole "today's show was brought to you by the letters, f, u, and the then number 2!" thing anymore? I think somewhere in there it morphed into Murray's "word on the street"... "Kids, the word on the street is predicament, like, how did Ali get herself into this predicament!"

In any case, I expect to find this challenge challenging. So expect some things to be a bit of a stretch. I know, first world problems, right?
Published Monday, April 01, 2013
Email ThisBlogThis!Share to TwitterShare to FacebookShare to Pinterest