Toys I Hate to Love

As silly as it sounds, we humans have pretty strong feelings about our toys. There are so many toys I just COULD NOT WAIT to give my kids. Some because I had them and loved them and some because I didn't have them and always wanted them. For example, as a kid I wasn't allowed to have toy guns. No nerf guns, not even water guns. But we made guns out or legos and tinker toys anyway (how else can you play war?). So guess what my kids got in their stockings last christmas? Blasters. Because blasters are like guns, but with more Star Wars. And I stand by that choice. The kids (mostly Dani) love to shoot the bad guys and sine the nerf bullets bit the dust the first week, they can't actually shoot anything but imagination. No harm there. However, I've found there are a plethora of toys I was so excited about, that even I wanted to play with, but are such a big pain in the ass almost I wish my kids had never even heard of them.

The Top 5 Toys I Hate To Love

1. Drawing utensils - My kids love to draw, but humanity has yet to invent the perfect device for children to color with. Crayons seem innocent enough, however thank god they are non-toxic because they are apparently delicious to toddlers. They're also also incredibly breakable. Besides, since they aren't very precise, my kids quickly wanted to upgrade to markers. So what's wrong with that? For starters small children are apparently completely incapable of using markers without their fingers getting absolutely covered in color, which would be fine I suppose, if they weren't constantly smearing their ink-covered hands all over their mouths and faces and everything in sight. But the real problem is the caps. Kids, or at least my kids, do not put caps back on their markers. Ever! They just get thrown back in the basket of markers without caps and forgotten until either I recap them or throw them away. And honestly, if my kids are sitting nicely at the art table, drawing me some pretty pictures, I'm probably celebrating by actually cooking some real food for dinner or maybe even getting a load of laundry done. I don't get a lot of uninterrupted time at home and I certainly would prefer not to spend it recapping markers.

2. Lightsabers - Lightsabers are so cool, and as a huge Star Wars geek, I love them... in theory. The problem is that lightsabers and small children, while adorable, are a recipe for disaster. Even with our strict "lightsabers only hit lightsabers" rule, I know that once the sabers come out, the crying will soon follow (and it might be me crying because they've knocked over my glass of wine). This effect is magnified 100 fold when there are other kids over, especially kids who don't have their own lightsabers and therefore don't even try to follow the "lightsabers only hit lightsabers" rule. We've taken to hiding the lightsabers when the kids have certain friends over. They just aren't cool enough to be worth the screams.

3. Playdough - There are so many playdough toys and accessories these days. As a kid we had the Playdough Factory and thought that was pretty cool, but that seems so simplistic compared to what you can buy now. At first the ice cream machine, donut maker, and Princess dress designer all seem cool. But it turns out that all these toys are just new fangled ways to get that colorful dough stuck in crevices and cracks, where it dries then lies in wait until the next time you pull out that toy so that it can then shatter into a million magenta pieces all over your floor. So now every time the kids pull out the playdough, instead of being excited about all the fun they can have, all I can think of is all the cleaning I'll have to do.

4. Dress-up clothes - I LOVE playing dress-up, even as an adult it's half the reason I spend so much time at the Renaissance Festival or sci-fi conventions. I had a pretty great stash of dress-up clothes as a kid, but I always wanted my kids' collection to be nothing short of epic. So why are dress-up clothes on this list? They are actually pretty easy to pack away, they're light, they don't hurt your feet when you step on them... but they are cat piss magnets. I don't know why but for some reason cats love to pee on dress ups more than any other object known to man. The fall out of this undeniable fact of life is compounded by the fact that my kids love to take all of their dress up out, drop them on the floor, pick out one or two things to wear, and leave the rest in a cat-enticing heap. 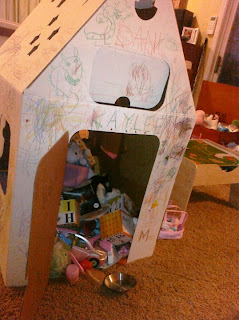 5. Just too many toys - The real problem with toys is just TOYS - the quantity over quality mentality that seems to be a part of our American consumer culture means that so many households are filled with  bins full of little plastic crap. Some things we willingly bring into our homes, some come from Happy Meals, others from gifts, goodies bags, school prizes... And the next thing you know your house is full of cheap plastic made in China junk. It seems worthless but my children take great advantage of the glut of small toys in our home, they use it as a fodder for these games I like to call "make a pile of crap somewhere in the house." Give them a box, they'll fill it up with shit, drag it across the house and dump it somewhere, like my closet or a bath tub. Once my parents game them a cardboard toy play house and they shoved stuff in through the windows until it looked like a miniature episode of Hoarders. Do other people's kids do this? Can we form some sort of support group?
Published Wednesday, July 17, 2013
Email ThisBlogThis!Share to TwitterShare to FacebookShare to Pinterest