It's here! My audiobook narrating debut! 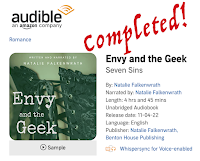 I wish I had some dramatic or poignant story to go with this final chapter of the saga. But no, it was pretty much just plodding work until complete. Let me tell you about it anyway. After I'd recorded the whole thing, I went through and edited the whole thing, marking areas I needed to re-record (or "pickups" in narrator lingo). I duplicated the type of spreadsheet Lessa uses to track pickups (in case you haven't read my post The making of an Audiobook... or two, Lessa is the amazing way-way-better-than-I'll-ever-be narrator of my other books).

Re-recording bits was both harder and easier than I'd expected. It didn't take a ton of time, but there were certain sections I'd marked to re-record that I banged my head against fruitlessly. It turns out my ear is more discerning than my mouth is talented (that's a weird sentence). Basically, I had to accept that I couldn't actually improve everything I wanted to improve, and some "fix this" sections were left as-is. My New England accent, for example, is fah from pahfect (har har). I modeled it after my own family—listening to an old recording of my grandfather to get in the right head-space (and vowel-space). But although I'm a born Mass-Hole, I naturally sound Minnesota Nice. And without professional voice training, there's only so much I can do to curb that, doncha know?

When I'd finished my own record-edit-re-record process, I had a couple people listen to the whole thing with an ear out for mistakes I'd missed (they found some). I even got this pro narrator I play hockey with to spot-check it and give me a little audio engineering advice (you can find the best peole at hockey). After I fixed all the things, I re-exported and uploaded the files. Within about two weeks they were processed and approved by ACX, and boom! Audiobook! Easy-peasy lemon-squeezy... except that I was pretty sick of lemons by the end and glad to be done. That's probably why it took yet another two weeks to get myself to write up this final blog post on the subject.

But it's done! Woohoo! And I hope people will listen to it... I think. I am glad that I did it. It was a great learning process and I honestly look forward to doing it again one day. But not until I write a memoir so that I can narrate using something more in my wheelhouse: my own normal voice. In the meantime, enjoy the audiobook of Envy and the Geek and/or this outtake reel of me fucking up, burping, and talking to myself.