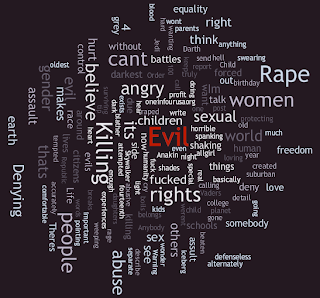 The Theme Thursday writing prompt this week is Evil: Does it exist? What is it? How do you define it? Why does it happen? It's hard to write a post about evil without being tempted to dodge the hard subjects and just blather on about Anakin Skywalker and the shades of grey that separate the dark side from the light... But I won't, because real evil exists in this world and it's important to call it out, however hard that is. So instead of pointing out that the the Jedi Order of the old Republic was so fucked up and basically abusive that it's no wonder there weren't 100 Darth Vaders created every year (because that's totally true), I'm going to talk about the 4 darkest evils of our planet. These are the things that keep me up at night, alternately shaking with rage and weeping for humanity. These are the things we all should be fighting against every day. (Warning, there may be some swearing. Evil makes me angry.)


1. Rape and sexual assault. 1 in 4 college women in the US report surviving rape or attempted rape since their fourteenth birthday (oneinfourusa.org). This is fucked the fuck up. There are no words to accurately describe how angry this makes me. When I think of the women in my life who I love, who have gone through some truly horrible sexual assault and rape experiences, my blood boils. It makes me want to give my daughters kung-fu lessons and send them to all-girl schools. And that's "just" the sexual assault we see most often from our comfortable suburban lives (as if that's not bad enough?). What we don't often see are the women and girls around the world being trafficked for sex, being forced into prostitution, being systematically raped while others profit.  This is one of the oldest and darkest of evils on this earth.

2. Child abuse.  I can't talk about this in much detail without shaking and wanting to cry. I don't even believe in spanking (I'm not calling that evil, but it's at least grey to me). So when I hear of kids being beaten, most often by their own parents, the people in their lives who should be loving and protecting them the most, it breaks my heart. And that's just the tip of the fucked up iceberg of things people around the world are doing to children right now. Anybody who would do anything to hurt a defenseless child belongs in the special hell.

3. Killing of innocents. There's self-defense killing, then there's evil killing. Killing because somebody doesn't believe what you believe. Killing for enjoyment. Killing to gain power. Killing because you hurt so you want to see somebody else hurt. Life should be precious. If you listen to the news these days though, you wouldn't think so. And that's evil, also very, very sad.

4. Denying others their rights as human beings. Here's where I tred on some political ground. I believe that denying other people their rights due to your personal beliefs is evil. This includes denying women the right to control their own bodies. Denying LGBT people full rights as citizens under the law. Those are the current battles. But we can't forget the battles we already think we've won, freedom from slavery, gender equality, racial equality, religious freedom... these are all being battled still by people on this earth. There are people who live as second class citizens do to something they have no control over. They can't get a job because they are muslim  They can't leave their house alone, because they are a woman. They can't marry the person they love, because they are gay. Those who would oppress others, deny them rights due only to their race, religion, orientation, gender... that's evil right there.

So does evil exist? Sadly, yes, it does. And it's not just in some country on the other side of the world, or some seedy back alley. It shows it's ugly head in our own neighborhoods, schools, offices. And it sucks. And now I'm angry and depressed. Thanks, theme thursday.

Published Thursday, May 23, 2013
Email ThisBlogThis!Share to TwitterShare to FacebookShare to Pinterest