What does it mean to be homesick? 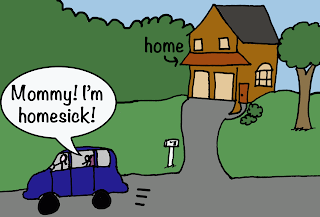 The concept of being "homesick" is kind interesting, and not as easy to define as I would have thought. My 3 1/2 year old recently learned the word but she doesn't quite get it yet. She'll tell us she's homesick after a 5 minute car ride to Target. Recently she claimed to be homesick during family outing at the mall. We try to explain that's not really how the word is used, but she insists that because she wants to go back to our house she must be homesick. And that got me thinking...

What is homesickness? Do you have to be gone for a certain amount of time? A certain distance?

I get homesick easily and always have, I suspect that's common among people with anxiety disorders. I was that kid who called her parents to pick her up from sleepovers (which is even more embarrassing than having a friend catch you sucking your thumb, believe it or not). It didn't happen every time, but enough to be memorable. As a kid, and even into my teen years, I preferred to stick close to home, for example I preferred to go to day camps (Camp Christmas Tree represent) rather than sleep-away camps. But despite my predisposition to homesickness, I always assumed I would go to college back in the New England. My family moved to Minnesota when I was 7 and the transition had been really rough, in a way I had been feeling homesick for the east for years.

When I was about 16 years old I went away to hockey camp in New Hampshire at Dartmouth. I was shocked to realize that New England was no longer home (had a little culture shock, doncha know). In those weeks away I felt extremely homesick (although my hockey skills got wicked awesome), to a degree that would only be topped by my time studying abroad (but that's another story). I couldn't wait to get home to Minnesota, to my parents, siblings, and friends. That's when I decided I was going to go to college in Minnesota after all (much to my parents' delight). 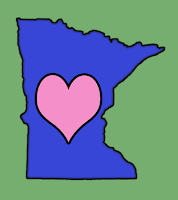 I still felt homesick when I was first starting college, even if it was only an hour from home. The first night, in particular, was horrible. The there was only one other person on my floor (and he was an upperclassman with friends and no need to talk up the shy kid down the hall), the shower had no hot water, my new towel left me covered in itchy blue fuzz, and I ended up curled up crying alone watching The Empire Strikes Back, unable to sleep. But eventually Carleton became home too, and when I left I was homesick for it too.

I guess any place can become home eventually if you can fill it with people you love and happy memories. Maybe that's why I never got homesick on family vacations, and why I don't think my daughter can be homesick when we're sitting together at Red Lobster. But I still think I'll stay in Minnesota forever. Just to be safe.
Published Wednesday, May 22, 2013
Email ThisBlogThis!Share to TwitterShare to FacebookShare to Pinterest