"Things I wish somebody would invent." This is a great theme, thanks Theme Thursday! Now I can post something lighthearted and fun to follow the total buzz-kill downer that I posted yesterday. Can I make it a top 10 list? Can I add a geeky flair? Hell to the yes. 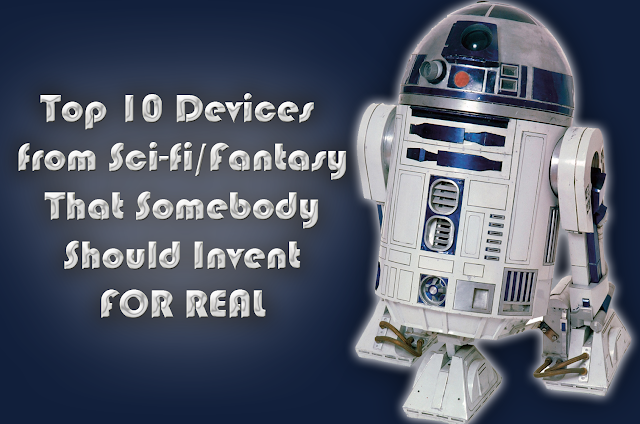 1. Transporter beams - Near instant transportation. If we could transport to work with a simple "beam me up!" it would give me an extra hour (or more if there's traffic) with my family each day. It would mean long-distance relationships would have to be inter-planetary inorder to require more than stepping onto a transporter pad to see one another. It would probably make helicopter parents 1000x worse, but I think that's a trade-off society could live with. Maybe.

2. Bacta - You might remember that in The Empire Strikes Back Luke gets mauled by a wompa snow monster then falls into a hypothermic shock (before getting stuffed inside a stinky tauntaun), when he finally gets back to base movie viewers are treated by the sight of Luke in his tighty-whities floating in a tank of goo. That goo is bacta. And bacta heals pretty much anything. Blaster shot? Grease burn? Mauled by wild ducks? Slap some bacta on that bad boy and you'll be good as new before you can say Admiral Ackbar. We could use a little of that.


3. Replicators - Replicators a la Star Trek (NOT Stargate, those mecha-bugs suck) can produce basically anything out of "raw matter". We're getting close with 3D printers, really a lot closer than I expected. But we still can't print food. And I could really use a food replicator for those days when one kid wants shrimp, the other wants spaghetti, and I want potpie. Mmmmm. (Also, we could probably solve world hunger or something.)

4. Time turner - A time turner lets you travel back in time, in Harry Potter it let Hermione take more classes than natural time allowed. Who wouldn't love to have a little more time? Then I could read and watch TV at the same time! (nerd!) Or maybe do something useful like go to work and get chores done at home. Anything for that little extra bit of time.

5. Space ships w/ FTL drives and artificial gravity - Spaceships in science fiction pretty much come with these two features standard: they can travel faster than the speed of light, and you can walk, not float, around in them. As somebody who is both impatient and gets motion sick, but would also die to visit another planet, I think NASA should really be putting a lot more time into these two features. It's just so obvious.

6. Holodecks - Introduced in Star Trek The Next Generation, the holodeck is an amazing little room that can project a holographic replication of anything, complete with sound, smell, and touch. Instead of reading a book, you can participare in a holonovel (I don't recommend participating in Game of Thrones though). Instead of visiting a brothel you can bang a hologram (look ma, no STDs!). Ew. But seriously, being able to expand your hopes and dreams and desires into realistic images that you can interact with is just so cool. Actually having holodeck technology would probably destroy the human race (there have been many articles written on the implications of this technology). But I still think it would be awesome and I want one.

8. Speeders - You could also just call them flying cars. Speeders can't too high off the ground, and they can't break atmosphere, but they can fly around. This is what the Star Wars, The Fifth Element, The Jetsons, and a dozen other sci-fi classics have been promising us for years. It's overdue. I want my flying car, damit! It's 2013! Stop making other-sized ipads and give me a reason to ditch my beloved CRV for a vehicle with a little altitude.

9. Driods - Who wouldn't want a cute little R2 unit of their very own? Maybe you could program it to do dishes and laundry. Forget ever changing your oil again, just let your droid do it (haha, take that smarmly up-selling JiffyLube guy). Also, if you did decide to take your speeder out rather than transport by beam, you'd have a nice little navigator to chat with and even take over flying/driving for you if you want.

10. Lightsabers! Duh! Of course I saved the best for last. This serves no real purpose in every day life and without The Force I'd probably cut my arm off. But lightsabers are just so. damn. cool.