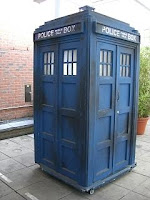 And if the proposition were real, that's how my mind would cycle, on and on, forever and ever. And that's why if I could go back and do something over... I wouldn't. You can't make me. Because great things come after terrible things. And terrible things make us who we are. I'm not saying this is true for everybody. Some people might really want to change something. But for me, I think the temptation to change the past would be like opening a family size bag of potato chips. You can't have just one, and you'll probably eventually regret having any at all.
Published Friday, July 12, 2013
Email ThisBlogThis!Share to TwitterShare to FacebookShare to Pinterest