Happy spring, y'all! Today is the first day of spring, or so they claim. Here in Minnesota we have a high of 20 degrees fahrenheit. That's the high. It's like 9 degrees right now. It snowed this week, and I suspect it'll snow again before the month is out. 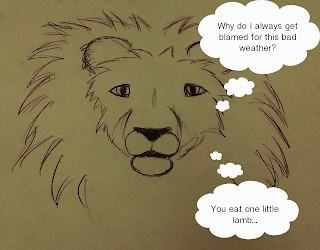 In elementary school, when learning about the different months, we always heard that March was "in like a lion, out like a lamb". Whoever wrote that did not live in Minnesota. Maybe they lived in New York or Philadelphia or something. So fine, teach kids in New York all about the lion and the lamb. It's a nice little saying. Just like "April showers bring may flowers". In Minnesota it should be "April showers will freeze overnight and kill your flowers!"

Anyway! The worst part is that we always forget. The snow will get a little melty in March one day and we'll all break out the flip-flops and declare spring is here! Then it will snow another 4 inches and we'll all act surprised and hurt. It's like an abusive relationship. Every year March tells us it loves us promises to be our little lamb, but then BAM, it smacks us around with -5 degree windchill and we are shocked and hurt. It happens every year. It's a vicious cycle. 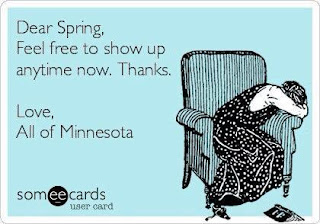